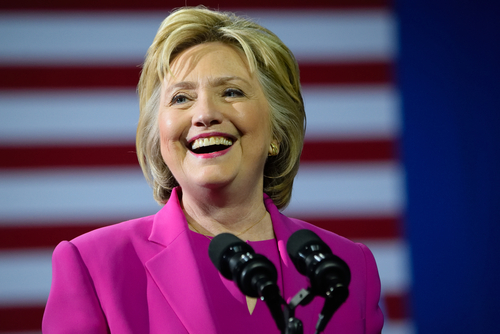 Hillary Clinton is denouncing the Biden administration’s “open borders” to position herself for a presidential run in 2024, according to veteran political adviser Dick Morris in a new interview.

“Nobody wants open borders, but no one wants brutal, horrific treatment of people,” Clinton told MSNBC anchor Joe Scarborough. “Some politicians would rather have an issue than intensify it to the point of human trafficking.”

Morris, a former Bill Clinton assistant, believes Hillary is positioning herself to run as a “moderate” candidate for Democrats in two years for what would be her third attempt at the White House.

He sees more and more evidence that Hillary will likely run for president, Morris claimed in an interview that aired Sunday on John Catsimatidis’ WABC 770 AM radio show. Morris noted that she has been observing Americans ridicule her party’s open borders policies.

All of this indicates that she will be the moderate candidate for president. She might very well be able to claim that the left lost us the House and the Senate after the mid-term election. We will lose the White House in 2024 if we continue to support a left-wing candidate. Morris explained that she would position herself as the only one who would tack to the middle and give them a fighting chance.

In 1992, Morris created a similar strategy for Bill Clinton when he won the Democratic primary, so he is familiar with her tactic.

During an appearance on MSNBC last month, the former New York secretary of state and senator called out GOP Gov. Ron DeSantis for flying migrants from Texas to Martha’s Vineyard, suggesting the Republican was involved in human trafficking.

“So many other Americans,” she believes the majority of Americans — are good-hearted and giving, and when people wind up on their doorstep in need, they’ll respond. They’ll feed and lodge them, and students in the AP Spanish class will be excused from school to go translate. That’s the type of American spirit we want to highlight at the “Clinton Global Initiative,” she said on MSNBC on September 16. She added that nobody likes open borders, especially people who know how governments and countries function. In last week’s episode, Morris was explaining his remarks to Catsimatidis when he projected that Democrats would abandon President Biden in favor of Clinton due to concerns that a more far-left candidate could be selected. ​

He claims this will prompt Democratic Party officials to approach Hillary and say, hey, look. Please run once more. Morris explained that the Democrats would claim that they needed her to save them from the insane left. Otherwise, Sanders might well be the Democratic candidate. They will add that they will lose Congress by a landslide and will be annihilated in the presidential election.

Instead of running for president again, Hillary Clinton says she will work to elect future leaders. However, that does not mean she won’t change her mind.   Meanwhile, Trump has openly hinted at another run for the presidency.