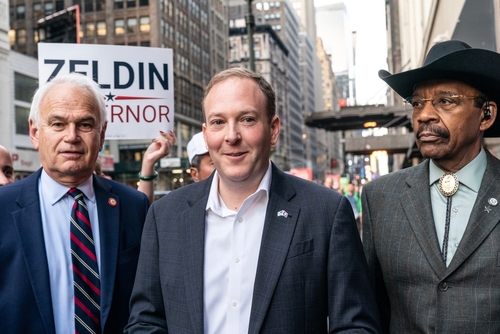 The major question for next week’s election is whether New York voters will recall their Democratic governor for the same reason. According to a number of recent surveys, in a state that Joe Biden won by 23 points in 2020, Gov. Kathy Hochul is clinging on by single digits.

There hasn’t been a fiercely contested election for governor in New York since 1994, a year similar to this one when many voters were dissatisfied with one-party Democratic dominance in Washington and when crime and the economy were the top concerns of the people. That year, Republicans seized control of both houses of Congress while George Pataki defeated Mario Cuomo in New York. In some respects, the challenges now facing Ms. Hochul and Democratic incumbents around the country are greater, with rising inflation harming voters and an overburdened immigration system making a living in American cities more chaotic.

However, the crime is particularly problematic for Ms. Hochul and some other Democrats. It might inspire New York voters, including independents, Bloomberg Democrats, and others, to elect Representative Lee Zeldin as the state’s first Republican governor since Mr. Pataki. Mr. Zeldin has an uphill battle in a heavily Democratic state. Still, the fact that a Zeldin victory is even possible is illuminating about the attitude of the electorate in New York and the status of the Democratic Party nationwide.

In the past year, in response to alarming trends in crime, inflation, and immigration, Democrats around the country, including Ms. Hochul, have given lip service to voter fear while offering a combination of empathy and multi-point plans instead of strong answers. Almost every New Yorker knows that Democrats control Albany and New York City with substantial majorities, can address state problems, and are accountable for failing to do so. Voters desire economic prudence, the removal of dangerous offenders from the streets, and a functional immigration system. Ms. Hochul has provided them with a $220 billion budget, halted significant reforms to the bail system, and avoided addressing the immigration system. Mr. Zeldin faced no opposition on any of these topics.

These nationwide trends are most evident in New York, where crime has increased by 30 percent in the past year. This includes an increase of 33 percent in robberies and 11 percent in rapes (although homicides are down 14 percent). With regular reports of passengers being pushed down the tracks, random muggings, and, most horrifyingly, a mass shooting on a Brooklyn train earlier this year, subway ridership remains dismal.

New York City’s mayor, Eric Adams, declared an emergency last month amid an increase in shelter overcrowding – a situation aggravated by the flow of migrants, including tens of thousands of migrants brought in by bus from Texas. The city’s shelter system cannot house these men, women, and children.

In politics and elections, the growing public anxiety about crime is more significant than the actual figures. It is the most crucial topic in the contest for governor, just as it dominated last year’s election for mayor of New York City. A Quinnipiac survey conducted mid-October found that 28 percent of probable New York State voters cited crime as the state’s most critical concern. In comparison, 20 percent cited inflation, and 14 percent cited defending democracy.

Specifically, New York City’s fear of crime might determine the outcome of this election. Thirty-six percent of New York City residents cited crime as their top issue, three times as many as those who chose inflation as their top concern. Mr. Zeldin must get 30 percent of the vote in New York City to win, which is not as improbable as it seemed earlier in the autumn. The Quinnipiac survey gives Mr. Zeldin 37% support.

Voters’ primary worries differ by political party, but Mr. Zeldin might win because independents side with Republicans on crime and inflation rather than Democrats, whose primary priority is defending democracy. The narrative of the 2022 election might be that Democrats misjudged how much people worried about the events of January 6 and Mr. Zeldin’s relationship with Donald Trump. In reality, Ms. Hochul and other Democrats around the country run the danger of failing to respond to the mood of the voters during a period of strain and anxiety by focusing their campaigns on these issues rather than the risks posed by crime, inflation, and immigration.

They depend on a sufficient number of moderates and independents to determine that backing a pro-Trump and anti-abortion Republican on November 8 is beyond the pale. In response, Mr. Zeldin asserts that New York State’s abortion regulations are safe and hints that the election-denying allegations against him are exaggerated.

In a Quinnipiac survey of probable New York voters, independents ranked crime (31 percent) and inflation (21 percent) as their top concerns, with democracy protection a distant third (11 percent). Protecting democracy was the most popular option among Democrats, while 30 percent of Democratic voters ranked crime and inflation as the second and third most important issues.

This summer, a knife-wielding assailant attacked Mr. Zeldin onstage at a campaign event; the assailant was released from prison shortly after his detention, only to be re-arrested and held following intervention by the U.S. attorney. Recently, Mr. Zeldin’s daughters dialed 911 as gunfire erupted outside their suburban house. These occurrences demonstrate the pervasiveness and significance of the crime problem this year. During the 1990s, when crime rates were high, and the topic was of great concern to voters, President Clinton’s campaign advertisements contained a huge police union endorsement, and then-Senator Joe Biden championed the crime bill; as a consequence, the issue was largely neutralized for Democrats.

As we emerge from the pandemic, voters across the United States may desire a change because they are profoundly dissatisfied with the country’s direction and its states. In New York, 52 percent of likely voters believe the state is heading in the wrong direction, an increase of eight points since 2018. Not only are crime and inflation voters’ top worries, but Mr. Zeldin’s messaging on these subjects is effective: according to a New York Post article on a recent Schoen Cooperman Research survey, people believe he would do better than Ms. Hochul on reducing crime, taxes, and spending. Mr. Zeldin wants to bring energy costs down through increased fracking, but Ms. Hochul called it “dead on arrival.”

In last week’s New York governor’s debate, Ms. Hochul targeted abortion and Mr. Zeldin’s links to Mr. Trump while Mr. Zeldin sought again to focus on crime, threatening to declare a “crime emergency.” When she campaigned for Congress, Ms. Hochul, backed by the N.R.A., emphasized new gun control measures. They both disseminated their respective messages, presenting stark contrasts between their campaigns. Mr. Zeldin placed combating crime first. The question is whether New Yorkers will do the same in sufficient numbers to elect (or almost win) the state’s first Republican governor in decades and send a jarring message to the Democratic Party about the issues that matter most to them.