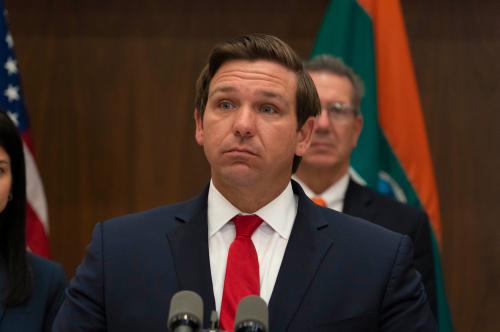 The office of Florida governor Ron DeSantis responded to media claims that his recent easing of voting restrictions in the three counties with heavily damaged by Hurricane Ian was motivated by the fact that these areas lean Republican.

After the Category 4 hurricane caused severe devastation to Charlotte, Lee, and Sarasota Counties, Governor DeSantis issued an emergency executive order on Thursday that increased access to mail-in ballots and early voting in those areas.

Many mainstream media publications, including the Washington Post and the Guardian, inferred in their coverage of the order that, because these three counties are mainly Republican, claiming the move was made to aid DeSantis’ chances in the upcoming midterm elections.

In a statement supplied to Fox News Digital on Monday, Bryan Griffin, the governor’s press secretary, denied that this decision was politically driven and stated that some counties voluntarily requested special accommodations, but others did not.

The statement read that the Department of State corresponded and consulted with Supervisors in every county impacted by Hurricane Ian. Only Supervisors in Charlotte, Lee, and Sarasota Counties requested provisions in writing to waive specific requirements to provide voters with a sufficient voting opportunity.

The contrast is evident when comparing the reports on voting preparedness in other counties to those in the three counties that received emergency help. The statement also included excerpts from letters submitted by county supervisors expressing concerns over voter access for midterm elections. Lee County claimed that several established polling stations no longer exist, and Charlotte County reported that Hurricane Ian had destroyed roughly one-third of our voting locations. Griffin also offered many examples of election supervisors in other counties who claimed to be prepared for the November election.

Orange County was cited in media criticism of DeSantis’ decision as a region that threatened “record floods” and leaned Democrat yet did not obtain exemptions. Democratic Orange County Supervisor of Elections Bill Cowles informed local media that all 20 polling locations were accessible.

Despite Manatee County’s proximity to Sarasota, Supervisor of Elections Mike Bennett stated, I do not anticipate any complications with the forthcoming election. Collier County, which DeSantis first won by 30 points despite being located south of Lee, likewise did not request voting help.

Some significant media publications criticized the Florida governor by blaming him for the late evacuation order in Lee County. On October 2, DeSantis pushed back against the media’s attention on Lee County’s evacuation order, noting that the hurricane was initially expected to strike Tampa.

DeSantis answered, “Well, where was your industry located when the hurricane struck?” “You were not in Lee County; you were in Tampa.”