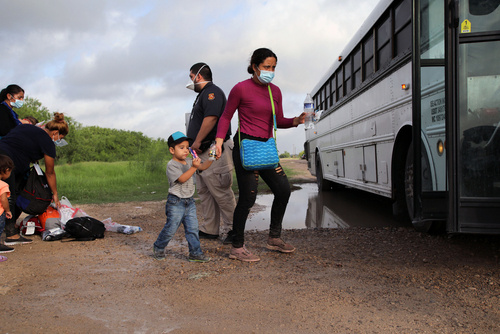 According to reports, President Biden has allowed 1 million migrants to enter the United States, with the majority expected to stay for at least seven years while seeking asylum. According to the New York Times, the immigration milestone is based on “internal Homeland Security data and court filings.” According to the news outlet, the seven-figure figure represents “a humanitarian challenge and a political flash point.” Those one million migrants are said to be from over 150 different countries.

However, illegal immigrants who have successfully evaded detection and now reside in the United States are reportedly not included in the government’s tally reported by the Biden administration. According to recent data, U.S. Border Patrol agents are on track to apprehend more than 2 million illegal immigrants at America’s southern border by the end of the fiscal year in September. According to reports, this would be the first-time border arrests surpassed 2 million in a single fiscal year.

Over five million illegal immigrants have entered the country since Biden took office, according to the Federation for American Immigration Reform. Border agents are reportedly pleading with people to stop crossing the border, citing how dangerous and potentially deadly it can be.

According to the United Nations, the US-Mexico border is the deadliest land crossing in the world. Former Acting ICE Director Tom Homan claims that over 1,300 migrants have died at America’s southern border since Biden’s election.

According to recent polls, most Americans believe the border crisis is an “invasion.” Texas and Arizona governors have been busing migrants from the border to Washington, D.C., and New York City for the purpose of making East Coast cities feel the effects of the border crisis.

Texas has recently relocated migrants to yet another “sanctuary city,” Chicago. Meanwhile, mayors in all three cities have condemned the practice, accusing governors of using migrants as political pawns.

Abbott stated in early August that the bussing of migrants was an “unprecedented action to secure our border” because “[President Joe] Biden refuses to do his job.” Abbott criticized President Biden’s border policies once more during the announcement of the first bus to Chicago.

Arizona Governor Doug Ducey is said to have ordered the stacking of shipping containers along the state’s border with Mexico, particularly at popular crossing points. According to the National Desk, some 8,000-pound containers toppled over, and Gov. Ducey suspected foul play.

This is a full-fledged disaster at the Southwest border, Morgan reportedly stated. What can they do to make it better? It’s as simple as pulling the Trump administration’s playbook from the shelf.

Former President Donald Trump’s administration, advocated for constructing a border wall and aggressively returned illegal border crossers to Mexico. Both of these policies appear to have been abandoned by the Biden administration. A new poll, however, shows that most Arizona voters still want a border wall built.