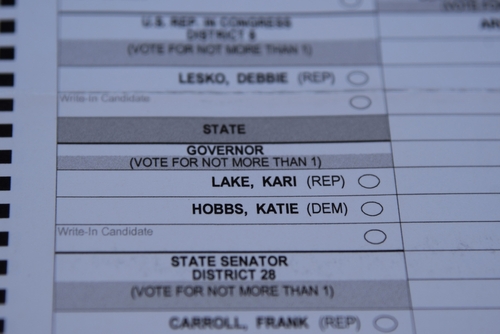 The Arizona Sun-Times reports that AFC members released the statement earlier this week. In it, the members accused Maricopa County election authorities of breaching the law in how they operated the voting stations and tallying the results for the midterm elections of 2022 and sought the resignations of many county election officials.

The statement continued these Maricopa County officials have thoroughly degraded their position, damaged all trust in our democratic process, and demonstrated that the only real answer is for them to quit in shame.

The AFC members did not hold back in their statement, branding politicians such as Maricopa Board of Supervisors Chairman Bill Gates “criminals” and alleging they “failed” Arizona residents.

After taking an outrageous and needless amount of time to count votes, it has been discovered that Maricopa County election officials may not only be incompetent but possibly criminals, the AFC chairman, State Representative Jake Hoffman, said in a statement.

The statement continued that the Maricopa County Board of Supervisors, especially Chairman Gates and Recorder Richer, had absolutely and humiliatingly failed the people.”

The statement added they had failed Maricopa County and the whole state of Arizona.

This declaration was made in response to a letter from Arizona Assistant Attorney General Jennifer Wright, in which she detailed what she considers to be many instances of election law infractions concerning the outcomes of the midterm elections in Maricopa County in 2022.

Wright requested responsibility in the letter, particularly for defective printers that stopped many voters from casting ballots on Election Day or, at the very least, made them feel disenfranchised and uncertain if their votes were tallied.

Wright said in the letter that Arizonans deserve a comprehensive report and explanation of the numerous failures that occurred with Maricopa County’s administration during the 2022 General Election.

Gates had responded to the letter. He responded by pledging to provide the requested information. The official Twitter account published the statement for Maricopa County.

In the aftermath of the election, Chairman Gates faced considerable criticism, both online and in person, for the numerous problems that occurred during and after the election.

According to KSAZ-TV, deputies from the Maricopa County Sheriff’s Office confirmed on Sunday that the agency is protecting Gates’ new, secret location, where he has supposedly gone for security reasons.

Sheriff Paul Penzone of Maricopa County gave a press conference in which he criticized people who have intimidated election officials or contested the legitimacy of election results.

Sheriff Penzone stated that they do not need outside meddling to tell them how to organize an election or which elected persons deserve their posts. “We get to choose. You don’t. ” And you have no right to challenge the state’s leadership. This is unacceptable. He added that they would not allow outside interference.