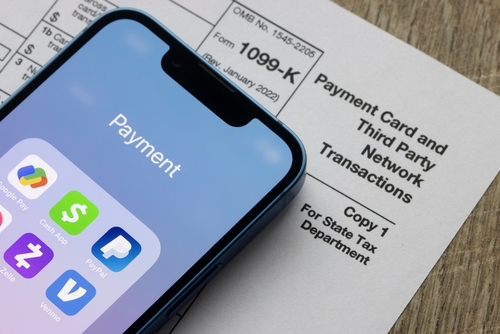 Workers in the gig industry need to take notice of the new forms they will receive at the end of the year. The American Rescue Act, enacted in 2021 by a Democratic-majority Congress, significantly alters the taxation of Americans who are paid through third-party organizations. Cash App, Venmo, and PayPal are among the companies mentioned by the New York Post.

The Internal Revenue Service describes the ramifications of the revisions. Before 2022, a worker was required to receive more than 200 payments totaling more than $20,000 to be issued a Form 1099-K. A third-party processor sends the paperwork to the worker compensated as an independent contractor. However, the paperwork is also sent to the IRS.

Beginning in 2022, everyone earning over $600 annually will receive a 1099-K. The paperwork still gets to the IRS, so people who disregard it do so at their own cost.

For many people, it will be a new form, according to Adam Markowitz, vice president at Howard L Markowitz PA, CPA. The worst thing they could do would be to disregard it.

According to Tommy Lucas, a certified financial planner and enrolled agent with Moisand Fitzgerald Tamayo in Orlando, Florida, the IRS may issue a notice or audit if income is not reported.

A third party may have processed the transaction for a profit, such as selling concert tickets for profit. This was confirmed by Justin Miller, national director of wealth planning at Evercore Wealth Management in San Francisco.

With the new lower threshold of $600 for Form 1099-K, personal payments and reimbursements may be wrongly recorded as taxable transactions, according to Miller.

The Center for a Free Economy urges Congress to alter the statute during its lame-duck sessions because extremely modest company ventures and unknowing non-business taxpayers have been trapped in the 1099-K reporting net.

Congressmen are now considering several proposals that would reinstate the previous 1099-K thresholds or, at the very least, substantially raise them from their current levels. The Center for a Free Economy strongly urges Congress to evaluate and adopt these rules before the conclusion of this year and the upcoming tax filing season.

Millions of Americans who have never gotten a 1099-K form and have no idea what to do with it will receive one. If they seek assistance from the IRS, they will encounter an agency struggling to process this avalanche of new 1099-K forms, keep up with filing season, clear up earlier backlogs, react to communications, and even answer the 800-TAX-FORM number, the organization stated.

Taxpayers who receive a 1099-K may not know what to do with it and are likely to disregard it when filing their taxes. According to the organization, this would result in the IRS imposing a tax on the amount listed on the 1099-K, even if the taxpayer has basis or business costs that would decrease or eliminate the eventual amount of tax owing.

According to the organization, if the legislation does not alter this, it will affect many Americans. The new 1099-K standards illustrate how a well-operating tax system must balance complexity and enforcement. This targeting of little income pockets will negatively affect taxpayers, 1099-K issuers, and the IRS. According to the organization, it will feed unlawful transactions and the cash economy, which often leads to more severe crimes.