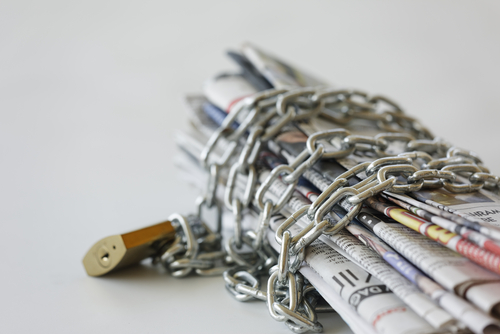 Reports are circulating that a journalist writing on the Biden administration’s failure was arrested by the FBI and then disappeared. James Gordon Meek, an Emmy-winning producer and highly regarded national-security-focused investigative journalist at the pinnacle of his career vanished from the face of the earth in April after federal agents raided his apartment.

According to a Rolling Stone article published on Tuesday about Meek’s apparent disappearance, his neighbor John Antonelli recalled the incident he observed outside Meek’s apartment building in Arlington, Virginia, on April 27.

A minute before 5 a.m. on April 27, James Gordon Meek of ABC News sent out a single-word tweet: “FACTS.”

The network’s national-security investigative producer responded to former CIA operative Marc Polymeropoulos’ assertion that the Ukrainian military was prospering against Russian forces with U.S. support. Polymeropoulos’ tweet was loaded with acronyms like “TTPs,” “UW,” and “EW,”  It was a response to a message from Washington Post Pentagon correspondent Dan Lamothe. Lamothe underlined the abundance of intelligence the U.S. military had gained about Russian operations by studying their real-time fighting tactics.

The exchange exemplified the interaction between the national-security community and its observers. Meek, an Emmy-winning investigative journalist who was also a former top counterterrorism counsel and investigator for the House Homeland Security Committee, straddled two worlds like no one else.

According to the neighbor, several local police cruisers were positioned in front of the Siena Park apartment complex, where Meek resided on the top level. Several unmarked cars were also present, according to him. Antonelli stated that no single truck displayed marks indicating which government agency was in control. According to the neighbor who witnessed the occurrence, it lasted around 10 minutes.

The predominant hypothesis, Meek was raided by the FBI for reasons relating to his award-winning journalism in the national security arena.

According to Rolling Stone, the 52-year-old was also completing a book about President Joe Biden’s failed military and ally departure from Afghanistan last year.

Multiple people acquainted with the matter verified to the news site that the FBI conducted a raid on Meek. A bureau spokesman informed Rolling Stone that federal agents were conducting court-authorized law enforcement activities in the 2300 block of Columbia Pike in Arlington, Virginia, that morning. Due to an ongoing investigation, the FBI cannot speak further.

According to Antonelli of Rolling Stone, they soon left and proceeded west on Columbia Pike towards Fairfax County. Most people would mistake this green vehicle for a tank if they saw it. However, Antonelli stated that he knew it was a Lenco BearCat. This type of vehicle is meant to be leaped from and allows the FBI to conduct a raid in a shorter time frame. It can also return fire if shot upon.

Given what the FBI and Department of Justice appear to have done to former President Donald Trump, pro-life protestors, and other conservatives, Meek’s position is not as shocking as it should be, which makes it all the more frightening. Notably, nobody knows where Meek went; April morning was the last time his coworkers and neighbors saw him.

According to Rolling Stone, Meek had not only disappeared from public view but also abandoned his presumably lucrative position at ABC News before the end of his contract, adding to the suspicion. His ABC colleagues informed the publication that they had no idea where the 6-foot-7 journalist disappeared.

One of his coworkers said, “He disappeared from the face of the Earth.”

A spokeswoman for ABC News stated he abruptly departed and has not worked for us in months.

According to the study, “independent observers” determined that the raid that led to Meek’s disappearance was the first of its sort under the Biden administration. Some believe the search was conducted because Meeks’s computer may have contained secret material. Others, however, stated that someone with Meek’s degree of professionalism would not risk becoming involved in such a circumstance.

Eugene Gorokhov, Meek’s attorney, vehemently claimed that illegal possession of sensitive material prompted the raid. Mr. Meek is ignorant of the claims made by unnamed sources regarding his possession of sensitive materials, Gorokohv said in a statement. If such records exist, as alleged, they would fall within the purview of his extensive career as an investigative journalist reporting government malfeasance, he added.

However, claims of the FBI investigation are alarming for a different reason: they appear to originate from a government insider. It is improper and unlawful for government employees to divulge information about an ongoing inquiry.

Meek has not been accused of a crime. However, independent experts think the raid may be the first to target a journalist under the Biden administration. A federal magistrate judge in the Virginia Eastern District Court authorized the search warrant the day before the raid. If the search were for Meek’s records, U.S. Deputy Attorney General Lisa Monaco would have had to approve it; a new regulation implemented last year bans federal prosecutors from obtaining journalistic material. Any exemption requires the consent of the deputy AG.

Federal investigators allegedly discovered secret material on Meek’s laptop during their raid, according to sources with knowledge of the situation. According to an investigative journalist who worked with Meek, it is extremely rare for a reporter or producer to save secret information on a computer.

According to the article, nobody is certain if Meek was left in his flat following the supposed raid or was taken away by federal agents. One may believe it would be quite simple to confirm the conclusion of the raid, but the fact that the case-related records have been sealed is even more unsettling.

Journalists from all media outlets and throughout the political spectrum should not just be worried but angered by this situation. The powers that be do not want the public to know what is happening in this case, at least not now.

Regardless of politics, this is another black eye for the Biden administration and the FBI.