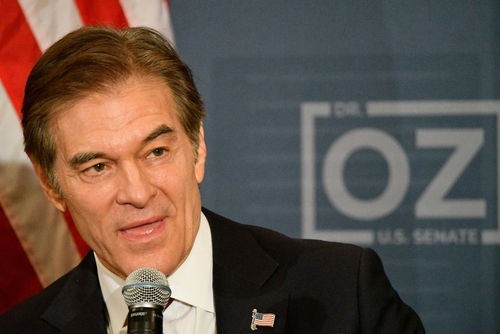 John Fetterman and Mehmet Oz squared off in their race’s first and only debate on Tuesday night, a harsh confrontation characterized in part by the Democrat’s continuing speech issues after a stroke.

The episode occurred precisely two weeks before the election that might determine the political balance of the U.S. Senate.

Recent polls indicate that the two candidates are now neck-and-neck, despite Fetterman’s substantial lead in the polls over his Republican opponent over the summer.

The hour-long discussion, which took place in Harrisburg, addressed themes such as crime, the economy, and abortion and allowed voters the opportunity to assess Fetterman’s rehabilitation following his stroke this year.

Even Fetterman’s campaign admits that the Republican, a former television talk show presenter, has an innate advantage in a debate setting. Fetterman only agreed to the Tuesday evening event, which was aired statewide and streamed on more than a dozen websites.

Fetterman recognized that his stroke was the proverbial “elephant in the room.”

In a note emailed to media on Monday, Fetterman’s campaign advisers acknowledged that “this is not John’s format,” especially considering that the candidate had a stroke in May that has impeded his communication.

The Democrat’s persisting auditory-processing troubles cause him to occasionally forget a word or stutter when speaking, but his campaign has published a note from a physician indicating that the candidate is not exhibiting indications of cognitive impairment and is prepared for public office.

During the debate, Fetterman utilized closed captioning so he could read back questions before replying; he has also utilized this technology in media interviews held after his medical emergency.

John Fetterman recovered from a stroke: According to a new medical assessment, the U.S. Senate contender has “no work limitations.”

Fetterman stated at the beginning of the discussion that his stroke was the “elephant in the room” and that he would likely misspeak or combine words throughout the event. In the hour that followed, his stuttering was obvious in some replies and obscured his meaning in others.

For instance, when asked if he supported increasing the U.S. Supreme Court, Fetterman responded in the negative but failed to articulate why.

He stated, “I do not believe in supporting the Supreme Court.”

At another time, he was questioned about his changed stance on fracking. He stated, “I favor fracking, and I stand by my statement that I support fracking.”

However, the Democrat attempted to use his medical issues as a means of connecting with his audience.

The stroke “knocked me down, but I’m going to keep getting back up,” he added. And for me, this campaign is about fighting for everyone in Pennsylvania who has been knocked down and needs to get back up.

Oz has yet to provide a yes-or-no answer on the countrywide abortion ban.

Oz has evaded the issue of whether he would support or oppose the nationwide 15-week abortion ban proposed by South Carolina Republican Sen. Lindsey Graham, stating merely that he is “pro-life” and that the practice should be controlled at the state level.

Tuesday, Oz continued to avoid delivering a yes-or-no answer about the measure, despite the moderators’ persistent requests.

“I’ll give you a more extensive response,” he replied. I will not support federal regulations that restrict the rights of states to pursue their own goals.

Fetterman, on the other side, stated that he would strive to reinstate the Roe v. Wade standard, which established that women had a constitutional right to an abortion. He also stated that he would favor allocating federal funds to assist women in locations where abortion is illegal to travel across state lines to have the surgery.

The candidates disagreed over crime and public safety.

Oz has made crime an electoral issue. Specifically, the Republican contender has accused Fetterman of being soft on crime, citing Fetterman’s role on Pennsylvania’s pardon board and as mayor of Braddock, a small city near Pittsburgh.

But on Tuesday, Fetterman defended himself against these claims and argued that Oz is all talk when it comes to public safety.

“I’m the only person on this platform who has been effective in combating gun violence,” he claimed, pointing out that Braddock went five years without a homicide.

Oz replied that he received the backing of the police union for Allegheny County, which includes Braddock.

Additionally, the Republican demanded an apology from Fetterman for drawing a pistol on an unarmed Black jogger in 2013, during the Democrat’s tenure as mayor of Braddock. According to Fetterman, he was uninformed of the man’s race at the time and stopped him because he thought he heard gunshots.

Tuesday, Fetterman did not apologize for the event, saying the majority-Black town appreciated his actions at the time and that he was Braddock’s top police officer.

“No one believes it was anything other than my split-second choice to defend our neighborhood,” he stated.

The centerpiece of Fetterman’s strategy to assist working people is opposing corporate greed and price gouging, as well as increasing the minimum wage to $15. Pennsylvania’s minimum wage is $7.25 per hour, which is lower than neighboring states and which Fetterman criticized as a “disgrace.”

According to Fetterman, working full-time should allow you to live a dignified life. Fracking in Pennsylvania: Fetterman and Oz share at least one characteristic with critics: They have vacillated on fracking.

However, Oz claimed that the government should allow market forces to increase the minimum wage and that a federal requirement would eventually damage workers by forcing businesses out of business. Instead, he thinks that promoting natural gas development in Pennsylvania is the key to economic growth.

Oz believes there would be enough money for everyone if they could release the energy beneath their feet in Pennsylvania. Oz stated that developing the business would not only improve salaries but also strengthen the economy and reduce inflation. During the discussion, both Fetterman and Oz maintained that they had continuously supported fracking while being chastised for flip-flopping on the topic.

Years ago, Oz co-wrote pieces decrying the negative health effects of fracking sites, and Fetterman once stated that he would oppose natural gas drilling unless Pennsylvania enacts stronger restrictions and levies an excise tax on the sector.

Oz deflects a question regarding Trump-related probes. Oz stated that he had not paid much attention to legal probes about the former president when asked what he thinks about them.

Oz stated that he campaigned rather actively, adding that legal concerns would “sort themselves out” and that he had “great faith in the American judicial system.”