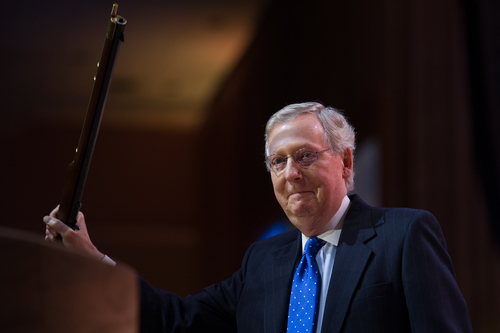 Sen. Mitch McConnell (R., Ky.) was re-elected minority leader on Wednesday, brushing off a challenge from Sen. Rick Scott (R., Fla.), the latest round in a battle that has been escalating over the midterm elections for months.

Mr. McConnell said at a news conference after he came from the closed-door GOP election and gave a thumbs-up to the reporters, “I’m thankful for the opportunity to continue to serve.” “I’m not in any way upset by having an opponent or a few votes in opposition,” he remarked.

Much of the discussion had revolved upon whether to delay the leadership elections, according to those in the room, with a breakaway faction suggesting that more time was required to consider how the leaders would confront the weaker-than-expected midterm results and the party’s approach to legislation. However, a request to delay the vote failed, and Mr. McConnell was re-elected by a vote of 37 to 10, with one Republican abstaining, according to legislators.

In a statement, Mr. Scott, who managed the Senate Republicans’ campaign arm, stated that the leadership results were disappointing, but that he would continue to try to eliminate, among other things, “reckless government spending and the disastrous inflation Democrats have unleashed.”

Underlying the argument is the poor performance of Republicans in the midterm elections. Republicans appeared to have momentum heading into Election Day on Nov. 8, but a “red wave” never materialized, as some voters put aside their worries about inflation and gave priority to concerns about the continued influence of former President Donald Trump and his false claims of election fraud, as well as abortion access.

Democrats retained control of the Senate in the midterms. The pressing question moving into a Dec. 6 runoff in Georgia is whether Democrats will strengthen their hand and put together a 51-49 majority or preserve a 50-50 Senate.

Mr. Scott and Mr. McConnell, as well as Mr. Trump, who has called for Mr. McConnell’s dismissal, began throwing fingers at one another over message and candidate quality following the Republicans’ failure to retake the Senate. Tuesday night, Mr. Trump declared his candidacy for the president once again.

The leadership election followed an acrimonious Tuesday lunch during which the two Republicans attacked one another on their leadership styles and management. After his own plan was questioned by Mr. McConnell, Mr. Scott asserted that the party should have entered the race with a clear agenda. According to Mr. McConnell, the quality of the candidates and the messaging of the GOP frightened swing voters.

In the session Wednesday, Sen. Josh Hawley (R., Mo.) noted that some people had stayed home rather than vote for Republicans in the midterms and he wanted to hear from Mr. McConnell and Mr. Scott about why that happened. He supported Mr. Scott.

“We’ve got to do something different,” said Mr. Hawley.

Some Republicans said that they anticipated that Mr. McConnell would emerge from the struggle more inclined to take input from rank-and-file Republicans, responding to pent-up irritation with what they perceived as a top-down leadership approach on everything from legislation to judges.

Sen. Mike Braun (R-Indiana) stated in reference to Mr. McConnell, “He will be stronger and wiser.” “The fact that there was a lively conversation will cause him to consider what brings us to the next level in a new way.”

Mr. McConnell stated, “There is nothing to negotiate; we have a means to meet often.”