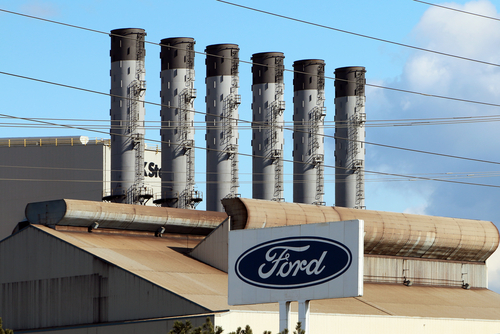 During a visit to Michigan, the first stop on a tour to highlight administration policies before the midterm elections, Treasury Secretary Janet Yellen said that the Biden administration’s policies encourage economic investment and opportunities in a broader range of U.S. communities.

The speech took place Thursday at a Ford Motor Co. plant in Dearborn, Mich., where electric cars are manufactured. The economy is slowing down because the Federal Reserve is raising interest rates to fight the highest inflation in four decades. In the past, higher interest rates have hurt Michigan’s important manufacturing industry. When rates go up, consumers may have to pay more for car payments and financing for other expensive items. In a report released last month, economists from the University of Michigan said they think hiring will slow down in Michigan next year and that the unemployment rate will increase slightly.

The Biden administration thinks that the laws that Democrats have pushed through will do much good for the state and the industrial Midwest. Among them is a new law that aims to help the electric vehicle industry, reduce prescription drug costs, and increase taxes on large corporations. Ms. Yellen also discussed laws passed in 2021 and 2022 that provide federal funding for infrastructure projects and domestic semiconductor production. She did this as Ford executives, plant workers, and state and local officials watched.

Ms. Yellen said that these policies are based on the idea that “some of the best chances for growth come when we invest in people and places that have been forgotten or overlooked.” She said big coastal cities had a disproportionate share of economic opportunities.

According to Republicans, however, early changes in economic policy made by Democrats during the Biden administration contributed to high inflation, and recent actions ( President Biden’s plan to forgive some student loan debt) will either make inflation worse or do little to stop it.

According to Rep. Patrick McHenry (R., N.C.), the Biden administration keeps taking a victory lap to talk about its economic plan, which is basically a slap in the face to struggling Americans. Families are still being hurt by record inflation and high energy costs. Instead of working to solve our most important economic problems, Democrats are doubling down on their failed tax-and-spend plans.

Ms. Yellen defended the early policies of the Biden administration on Thursday. She said that the roughly $2 trillion coronavirus-aid package that Democrats passed last year had led to fast job growth and helped the economy handle the uncertainty it was facing.

In the midterm elections, which will decide which party controls the House and Senate, the two parties have different ideas about the economy’s direction. U.S. economic growth is slowing. It has shrunk for two quarters in a row this year, and inflation has been near its highest level in 40 years. Low unemployment and a steady rate of new jobs have always been good signs for the economy.

In response to reporters’ questions, Ms. Yellen said that she was worried about the future of the world economy. She said that Russia’s invasion of Ukraine had messed up the food and energy markets. She explained that the Biden administration is taking steps to help Europe, which has been hit hard by rising energy prices, and other allies by working to put a price cap on Russian oil. The goal is to limit Russia’s money from selling energy while keeping supplies available.

Ms. Yellen said that gas prices have decreased from their record highs earlier this summer, leading to a general slowing of inflation. Still, she said that there are problems worldwide that make it hard to tell what will happen.

She said she doesn’t want to make a number-based guess about where inflation will go in the next year. In July, the unemployment rate in Michigan was 4.2%, which was the lowest it had ever been. However, it could be hard for a state that has long made gasoline-powered cars to switch to making electric cars. Last month, Ford announced it would lay off about 3,000 white-collar and contract workers to cut costs as it moves toward electric vehicles in the long run. The Michigan-based company has had problems with its supply chain, which made it hard for factories to produce vehicles and accessories.

In 2020, President Biden won Michigan, which Donald Trump had won in 2016. This fall, the state will hold a race for governor that will be closely watched.

This is the first stop on a tour that Ms. Yellen is taking this month to explain to Americans why the administration thinks its economic agenda is important. Ms. Yellen went on a tour of a Ford plant where the electric F-150 Lightning pickup trucks are made. There, she talked to Ford executives and plant workers and pushed a button to move a truck on the assembly line to the next station.