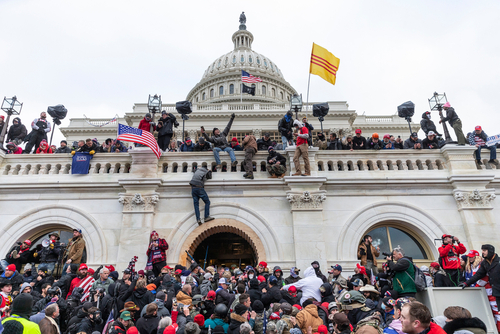 An investigation into the Capitol riot on January 6, 2021, is escalating, with a judge giving a rioter the longest sentence so far and agents arresting a lawyer for a right-wing group accused of taking part in the attack at the U.S. Capitol.

Two former White House lawyers are the most senior officials to be called to testify before a grand jury. According to Mr. Trump, if he were to run for president again in 2024 and win, he would pardon the rioters. In an interview with Wendy Bell, Mr. Trump said he would seriously consider full pardons. He means full pardons with an apology to many, at least, and he further stated that “they’ve been so badly treated.”

As a result of his assault on a police officer during the January 6 riot, Thomas Webster, 56, received a 10-year sentence. District Judge Amit Mehta addressed Webster in court at the end of an emotional court hearing on Thursday. He said that at least on that part of the police line, your (Webster’s) actions allowed thousands of people to pass through the police line.

According to Judge Mehta, he was shocked by Mr. Webster’s behavior, given his background as a former New York City police officer and veteran of the U.S. Marine Corps. Judge Mehta said during the hearing that he had been a public servant in the truest sense of the word for 25 years, and Webster threw all that away in 46 seconds.

The prosecution had sought a sentence of 17.5 years. Mr. Webster’s lawyer asked Judge Mehta not to impose any more prison time for his client beyond the year and a half he has already spent in custody or under home confinement.

In May, a federal jury convicted Mr. Webster, rejecting his claim that he was acting in self-defense when he struck a D.C. police officer with a flagpole, tackled him, and grabbed a gas mask from him.

During the altercation, Noah Rathbun testified that he struggled to breathe during the assault.

During the trial, Mr. Webster argued that Mr. Rathbun was a “rogue cop” who initiated the confrontation. Mehta stated during the hearing that the testimony was “not credible” and an “alternative truth.”

More than 860 people have been arrested for crimes related to the breach of the U.S. Capitol, including more than 260 people accused of assault.

Another development related to the Capitol attack involved the arrest of a lawyer for the Oath Keepers militia group. It is alleged that Kellye SoRelle, 43, tampered with witnesses and conspired to obstruct the certification of President Biden’s Electoral College victory. SoRelle, in custody, did not respond to requests for comment, and it was unclear whether she has legal representation.

Next month, several Oath Keepers members will be on trial on seditious conspiracy charges. In addition to the January 6 violence, prosecutors are probing the events leading up to the attack on the Capitol. This includes Mr. Trump’s actions, not just those of his allies, in attempts to overturn his 2020 election loss. Pat Cipollone, Mr. Trump’s White House counsel, and Pat Philbin, his deputy, received subpoenas last month.

According to a person with knowledge, they are scheduled to appear before a federal grand jury on Friday to explain what led to the riot.

So far, Cipollone is the highest-ranking former Trump White House official to be called to testify in the federal investigation. During the Capitol riots, he was in the White House and attended several meetings in which Trump’s allies sought to overturn the election before the attack.