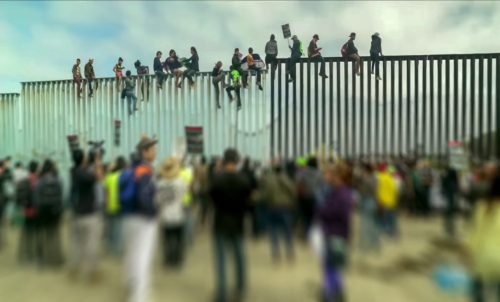 A new complaint charges President Joe Biden’s administration is violating federal law with its new program that would allow tens of thousands of foreigners to work and live in the country.

The secretary of homeland security is authorized by federal law to award “parole” to illegal immigrants if he or she determines, on a “case-by-case” basis. Parole can be awarded if the immigrant faces a humanitarian crisis or permitting the individual to remain in the nation would have a “substantial public benefit.”

However, the government allows tens of thousands of immigrants from four countries, including Venezuela, to earn parole after passing a background check and convincing U.S. citizens to sponsor them.

According to a recent lawsuit filed by Texas and 19 other states, the program does not adhere to the explicit limitations given by Congress.

It is requesting that a federal judge in southern Texas deem the practice unlawful and force the government to suspend it.

This illegal amnesty policy would let hundreds of thousands of immigrants into the U.S. each year and further exacerbate the current immigration catastrophe.

In the fall of 2022, the program was established based on a parole scheme for Ukrainian refugees. Initially, only Venezuelan natives were offered parole. The administration authorities stated that parole would be granted to up to 24,000 Venezuelan citizens.

In January, the government expanded the program to include nationals of Cuba, Nicaragua, and Haiti and stated that it would admit up to 30,000 immigrants per month from these four nations. Immigrants must apply for parole in advance and provide the name of someone who will agree to financially assist them if parole is granted. In addition to passing a background check and presenting oneself at a port of entry, the immigrant must not enter the United States illegally.

To evade Title 42, a public health order permitting U.S. authorities to deport many illegal immigrants, immigrants may assert specific conditions. According to The Epoch Times, the qualifications include being pregnant and lacking access to “secure housing” in Mexico.

The program is inaccessible to unlawful border crossers, according to administration officials.

During a joint briefing with the presidents of Canada and Mexico earlier this month, President Biden stated that they were trying to make it simpler for people to come here, opening up the capacity to get here but not putting them through that “god-awful process.”

According to official documents, DHS will process applications on a case-by-case basis and grant two years of work authorization to those who qualify. The agency states the parole ability given to the secretary by Congress.

However, Texas and the other states argue that authority is being misused, pointing out that up to 360,000 immigrants would be admitted to the United States under the scheme.

The Department does not have the jurisdiction to invite yearly more than a third of a million unlawful immigrants into the United States, the lawsuit states.

Congress said in 1995 that parole powers were being granted too broadly before instituting restrictions.

It is obvious from the wording of section 212(d)(5) that the parole power was meant to be employed on a case-by-case basis to fulfill individual needs, and not as a complement to the immigration policy established by Congress. In recent years, parole has been increasingly utilized to admit entire categories of immigrants who do not qualify for entry under any other category of immigration law, with the intention that they will remain in the United States permanently. This violates the intent of section 212(d)(5), according to a legislative report from the time.

The restrictions made it plain that parole could only be granted “on a case-by-case basis… for urgent humanitarian grounds or substantial public benefit.”

According to the states, the new program has damaged states like Texas since Biden assumed office, and the border problem has necessitated the states to spend more money and resources on dealing with illegal immigration.

The program will increase crime and drug trafficking in Kansas towns, necessitating greater law enforcement spending. According to the document, this is because at least a part of these aliens will go to Kansas. This means that there will be more people in Kansas, at least some of whom will participate in illicit conduct and with whom law enforcement will undoubtedly interact.

According to the lawsuit, the government allegedly violated federal law by not permitting public comment before adopting the new scheme.