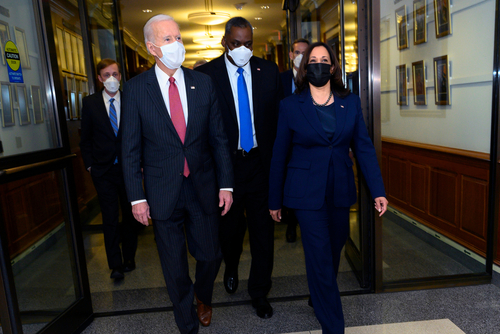 Illegal aliens were cleared from the streets of El Paso on Sunday, marking the first time in over two years that Biden has visited the Mexican border, conveniently walking along the wall built by Trump and answering only the questions he wanted to answer from reporters. Many critics have pointed out that this action nullified the whole point of his visit.

An Irate Governor, Greg Abbott, greeted the president and told him he was “two years too late.” Abbott sent Biden an open letter outlining the necessary steps to take to bring the border situation under control. President Biden smiled, shook his hand, and promptly forgot about him.

Despite the overwhelming evidence to the contrary, El Paso’s Democratic mayor, Oscar Leeser, said that his city regularly cleans the neighborhoods in question.

When it comes to this subject, Roy is on the same page as Abbott. From the floor of the House, he repeated their words verbatim. An argument for cutting off funding to the Department of Homeland Security (DHS) because of its disastrous performance in protecting American borders.

As it happens, many conservatives are in agreement. Roy sneered that he assumed the president of the United States could identify the southern border on a map. Two years went by before he arrived at the southern border. But then what occurs? El Paso has no crime or disorder because everyone just walks around and fixes things.

The Republican ballbuster then took aim at DHS, saying that 8,00 illegal immigrants cross the border every day. He raged; the majority in the House needs to perform their duty right now. Roy stated they would have to withhold money from a Department of Homeland Security unwilling to protect the nation’s borders. Roy vowed that this year is the year they will finally get around to it.

Biden told reporters at a press conference on Thursday that Republicans were not “serious” about border reform since they had rejected a request for extra money to pay for additional holding facilities, transportation, asylum officials, and immigration judges.

Biden said, “I don’t like Title 42.” However, the law has changed, and he will comply with it.

According to Business Insider, Biden has projected that by the end of 2023, the Supreme Court would decide against Title 42. Biden stated that  Immigration is a political issue that conservative Republicans will always run on. However, they now have a choice: they can keep utilizing immigration to attempt to gain political points, or they can help fix the problem.

There are rumblings among Republicans that they may move to impeach Homeland Security Secretary Alejandro Mayorkas over his handling of the border issue.

The Republican-controlled House plans to use its budget-cutting authority to pressure the White House to abandon President Joe Biden’s failed socialist ideas. According to the GOP, this wake-up call isn’t only going to hit DHS hard, though.