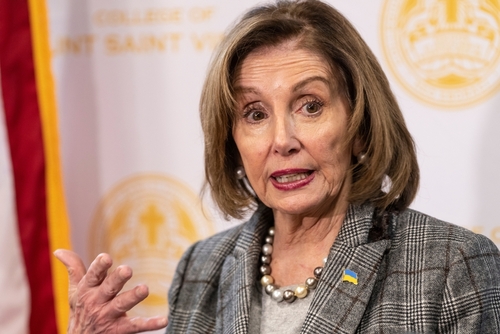 Former President Donald Trump has long argued that House Speaker Nancy Pelosi was largely responsible for the inability to safeguard the Capitol during the tragic events on January 6, 2021. Now it appears that Trump was correct.

This week, five House Republicans released text messages and emails that Democrats have ignored for years, demonstrating that Pelosi was directly involved in drafting and implementing the Capitol Hill security plan that catastrophically failed during the January 6 Capitol incursion.

According to the study, the documents also indicate that the California Democrat “repeatedly rejected” the funding required to safeguard Congress and the adjacent federal office buildings connected by tunnel to the nation’s Capital.

Wednesday saw the release of the 141-page report titled “Report of Investigation: Security Failures at the United States Capitol on January 6, 2021.”

The investigation was a direct response to the political witch hunt conducted by Pelosi’s special committee on January 6, which consisted of seven Democrats and two vehemently anti-Trump Republicans.

According to the report, the security breach occurred because of mistakes made by House Democratic leaders and Capitol Police officials, who permitted “optics” over the presence of armed police in the Capitol and overrode security concerns.

Because of leadership and law enforcement shortcomings within the United States Capitol, the complex was susceptible on January 6, 2021. However, the Democrat-led inquiry in the House of Representatives has ignored the institutional shortcomings that left the Capitol vulnerable to violence that day, the study states.

In addition, the investigation revealed that warning signs of the possibility of violence in the weeks preceding Joe Biden’s inauguration and the certification of the election were disregarded – facts the committee on January 6 refused to acknowledge.

The study states that before that day, the U.S. Capitol Police (USCP) received adequate information from various sources to predict and prepare for the violence that happened.

The Democrats have spent two years denying that the Speaker of the House and her colleagues were involved in the January 6 disaster. Pelosi stated a month after the invasion; she had no control over the Capitol Police. Obviously, this is false. According to Just the News, Jordan stated that the staff and Speaker of the House were responsible for the lack of adequate protection on that particular day.

Two of Pelosi’s top aides frequently attended security briefings with Capitol police and were fully aware of all threats and countermeasures, according to records obtained by the GOP probe. In certain instances, the Speaker’s office even assisted in revising the execution plans.

In addition, the study states that the first person Pelosi fired after January 6, House Sergeant at Arms, Paul Irving. Irving worked closely with the Speaker and her staff and excluded Republicans from crucial security conversations.

According to the story, Irving pleaded with Pelosi to improve security and grant money to engage the D.C. National Guard as required, but she refused.

Just the News added, “Capitol Police whistleblower” informed congressmen that there were ample and detailed warnings that violence would occur on January 6; however, the leadership of the Capitol Police failed to adjust the security plan to address the threat, and the political leadership in Congress repeatedly refused to provide resources to secure the building.

According to the site, the U.S. Capitol Police issued a statement on Wednesday following the release of the GOP report. It did not contest a single word in the paper, stating that it was committed to implementing the required modifications to avoid future invasions.

The agency stated that its officers, officials, and civilian personnel had worked around the clock for over two years to resolve many of these issues and comparable conclusions from a series of post-January 6 examinations.

According to Just the News, it was said that they respect everyone’s opinion, and they were sure that the U.S. Capitol Complex is better to secure due to the hard work of our courageous men and women and the resources granted by Congress to implement recommendations.

Unlike the phony January 6 Committee, the House Republicans have produced a helpful report that will keep Capitol and USCP officers safe without subpoena authority or a budget, he stated.

The paper trail connecting Pelosi’s office directly to the security failings prompted calls for the Speaker to be held accountable.

If Pelosi’s committee on January 6 intends to submit “criminal referrals” to the Department of Justice for indictments related to the “insurrection,” one would expect that there is a reference to the Speaker herself.