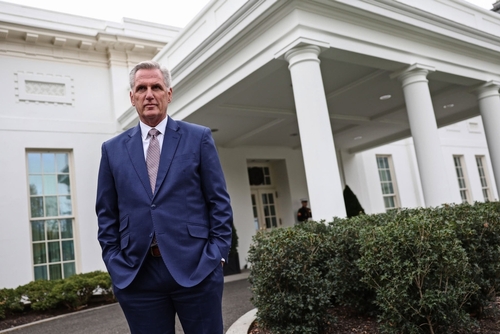 After passing the $1.7 trillion omnibus spending measure on Friday, House Republican Leader Kevin McCarthy called it a “stain” on Congress. Currently, the United States owes more than $31 trillion. The bill increased government spending and failed to account for inflation. The President signed the bill making it official.

According to Biden, the bipartisan funding bill advances key national priorities and concludes a year of historic bipartisan progress. Economic growth, competitiveness, and community development all benefited from this bill.

McCarthy disagreed with the President. McCarthy tweeted, for the first time in history, the House approved a measure without a physical quorum present; more people voted by proxy than in person. The flagrant disdain for Article I, Section 5 of our Constitution will permanently tarnish this Congress, as will the passage of the omnibus spending bill.

The law was passed by a 225 to 201, with nine Republicans voting in favor. Rep. Alexandria Ocasio-Cortez, D-New York, voted against the bill, while Rep. Rashida Tlaib, D-Michigan, abstained from voting.

McCarthy also stated in the tweet that after assuming control of the House of Representatives in January, Republicans would “alter the course” of the United States and that proxy voting will be abolished.

McCarthy added the Republicans would also restore the House to a constitutional body by permanently eliminating proxy voting. The law, which provides financing for the government through September 2023, allocated $858 billion for defense, $787 billion for non-defense domestic programs, and close to $45 billion for military and humanitarian aid to Ukraine. The omnibus package has 7,200 earmarks totaling over $15 billion.

Many Republicans, including McCarthy, tried to approve a short-term government funding package until mid-January, giving the party a

more significant influence over the bill’s contents. However, the effort failed.

The bill was criticized by both Republicans and Democrats, with Senator Rand Paul, R-Ky., saying that “The process stinks.” In addition, Paul called it an abomination. Government should not be run this way as a $6 trillion entity. They want 24 hours to process this, and then they want to proceed.

Nancy Pelosi (D-Calif.) responded to House Minority Leader Kevin McCarthy’s (R-Calif.) comment that the government funding omnibus bill was “one of the most shameful acts” the chamber has ever witnessed, had Pelosi questioning if he had forgotten about Jan. 6, 2021, and the events that had to unfold at the capital that day. The new bill also adds the Electoral Count Reform Act of 2022, which modifies the 1887 Electoral Count Act to ensure the way votes tallied by Congress reflects the State’s vote for President.

A monstrosity like this should not exist. McCarthy said it was one of the most shameful things he had ever seen. The whole process had failed the American people, he stated. There is no better example of one-party rule failing in the House, Senate, and White House.