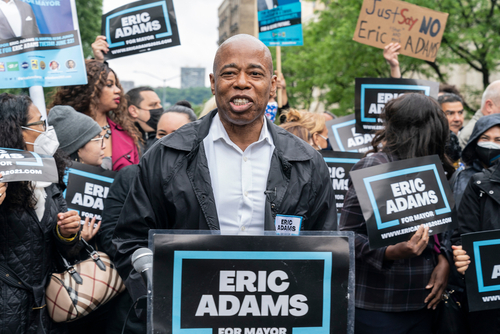 With the first cracks of Democrat unanimity over the Biden regime’s failed immigration policies having already appeared and migrants flooding into cities governed by left-leaning politicians. New York City Mayor Eric Adams visited the southern border and demanded that the federal government do more to address the crisis.

On Sunday, Mayor Adams traveled to El Paso, Texas, to observe the ongoing humanitarian disaster as its ripple effects are overwhelming resources in his city. In New York, city officials are forced to feed and house thousands of illegal aliens who have been arriving by bus; two days after Adams stated that the city had reached a “breaking point,” even more migrants arrived. Thousands of migrants have arrived in the past week alone.

At a Sunday press conference with El Paso Mayor Oscar Leeser, Adams stated they were pointing their finger at the national government. Adams said this is a nationwide issue, and we must quickly implement real immigration reforms, not a short-term solution. He added that the government needs to ensure that the expense of immigration reform does not fall on local municipalities. Adams was essentially pleading for assistance from a White House that has nearly thrown out the red carpet for invaders since Biden took office two years ago.

These problems cannot be solved from an “ivory tower,” he remarked. “You must be willing to go on the ground;” that is who he is. No matter the situation, he believes it is part of his responsibility as mayor to be on the ground, which he explained is why he is in El Paso.

Adams also criticized Colorado Governor Jared Polis, who had joined Republican governors in transferring migrants from their states to New York City and Chicago, places that have been forced to reconsider their support for illegal immigration now that the problem is in their backyards.

The governor of Colorado, who is a Democrat, and the governor of Texas, who is a Republican, Admas believes that both Governors have a bipartisan disregard for cities. Adams stated that it was wrong to bus migrants, and it should not have happened and should not continue.

In response to Adams and Chicago Mayor Lori Lightfoot’s complaints, however, Polis immediately capitulated on the issue of busing the migrants out of state. Twitter users were mainly indifferent to Adams, and they took to the site to roast the mayor, liberally roasting him with his hypocrisy.

Mayor Adams will have the opportunity to garner support when he attends the U.S. Conference of Mayors in Washington, D.C., later this week.