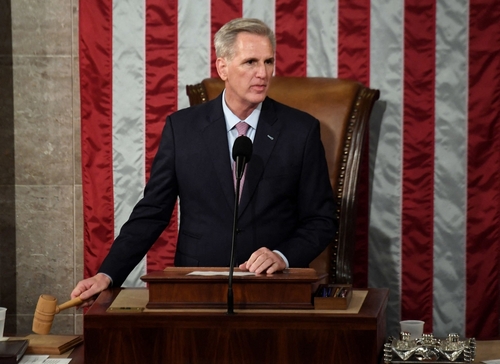 On Thursday, Kevin McCarthy, the Speaker of the House, made good on his promise to remove three liberal Democrats from key committees if he were elected.

Reps. Adam Schiff (D-Calif.) and Eric Swalwell (D-Calif.), and Rep. Ilhan Omar (D-Minn.), both members of the radical left Squad, will not be returning to the House Intelligence Committee, as McCarthy has announced.

Many years of complaints from Republicans, who were powerless to do anything about it while Democrats controlled the House, culminated in their ouster.

McCarthy’s interest in Schiff stems from his work investigating whether or not the Trump campaign coordinated with Russia to help Trump beat Hillary Clinton in 2016.

At the core of the first impeachment trial was a call between Trump and Ukrainian President Volodymyr Zelenskyy, of which Schiff was accused of embellishing the details.

In a November interview, McCarthy warned that Adam Schiff, who has repeatedly deceived the American people, will not be permitted to serve on the Intelligence Committee.

An interview in 2020 revealed Eric Swalwell’s connections to a Chinese national named Fang Fang, also known as Christine Fang, who is suspected of being a spy. According to the article, Fang participated in a massive Chinese surveillance operation that targeted lawmakers to acquire access to political power and assisted him in fundraising during his 2014 candidacy for Congress.

According to later sources, Swalwell had romantic ties with the alleged spy but severed ties with her after receiving a warning from the FBI about her suspicious behavior. Following that, in 2015, she departed the country.

McCarthy alluded to an FBI briefing he had received about Swalwell’s encounter with the alleged spy during a press conference on Thursday.

Speaking to the press after receiving the FBI briefing, McCarthy said that Swalwell would not serve on any committees because of the troubling report on him.

McCarthy has expressed concern about Ilhan Omar because of statements she made in the past that were highly critical of Israel and were widely interpreted as antisemitic. In 2019, Omar issued a forced apology after she tweeted that members of Congress were being paid by a prominent pro-Israel lobbying group to support the nation.

Omar has also been condemned for downplaying the conduct of the 9/11 hijackers, comparing the United States and Israel to terrorist groups, and accusing Israel of terrorism and war crimes.

Referencing Omar, McCarthy said in November at a Republican Jewish Coalition leadership gathering in Las Vegas that he sees antisemitism growing not just on campuses but increasingly in the corridors of Congress.

McCarthy claims he kept his word from 2022, when he was speaker, that Omar would be removed from the Foreign Affairs Committee.