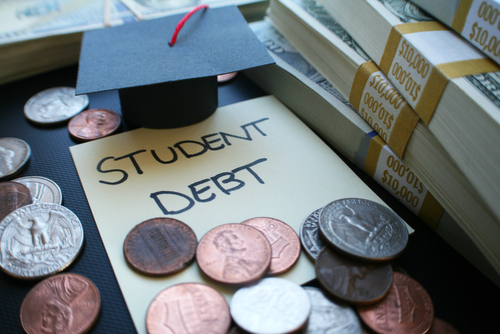 According to a new analysis, Biden announced plans to cancel student loan debt for millions of borrowers across the country, but this could exacerbate the ongoing inflation crisis.

Biden’s executive order – which wipes out $10,000 in debt for borrowers earning less than $125,000 and $20,000 for Pell grant recipients — could exacerbate inflation, which is already hovering near a four-decade high, according to the Committee for a Responsible Federal Budget (CRFB), a nonprofit based in Washington.

As the national debt approaches record levels and inflation surges, this announcement is gallingly reckless, said Maya MacGuineas, president of CRFB. This would add another $400 – $600 billion to the $300 billion already spent on student debt relief, none of which has been paid for.

Several months have passed since the White House considered canceling some federal student loans. As a candidate, Biden pledged to erase at least $10,000 in student loan debt for most borrowers. Since then, congress has floated income-based parameters that would eliminate student loan forgiveness for households earning more than $125,000.

The matter is further complicated by soaring food, gasoline, and rent prices, with fears that wiping out billions of loan debt will worsen inflation.

According to critics, including former Treasury Secretary Larry Summers, putting more money back into borrowers’ pockets could keep inflation high for many months and years.

Summers wrote in a series of tweets this week that the Biden Administration should not contribute to inflation macroeconomically by offering unreasonably generous student loan relief or microeconomically by increasing college tuition.

According to a nonpartisan study by the University of Pennsylvania’s Wharton School, the Penn Wharton Budget Model determined that if the policy were limited to individuals with incomes less than $125,000, a $10,000 one-time loan forgiveness would cost about $300 billion. A decade of the program will cost $330 billion, and scrapping the income limits would cost $344 billion.

The White House’s action is completely at odds with its talk of deficit reduction, MacGuineas said. By forgiving billions in student loans, the nation’s deficit will increase twice as much – it reached $2.8 trillion in the fiscal year 2021, the second-highest in history – undoing the $300 billion Democratic plans for deficit reduction. She added that the president undid a year’s worth of work on the fiscal front with a pen stroke.

Most of the benefits of the executive order will go to the top earners. An analysis by Penn Wharton found that 69% and 73% of any debt forgiven would go mainly to households in the top 60% of income distribution.

On Wednesday, Biden also announced that he would extend the federal student loan payment pause, due to expire in August. In March 2020, the interest rate was frozen and set to 0% at the onset of the Coronavirus pandemic.