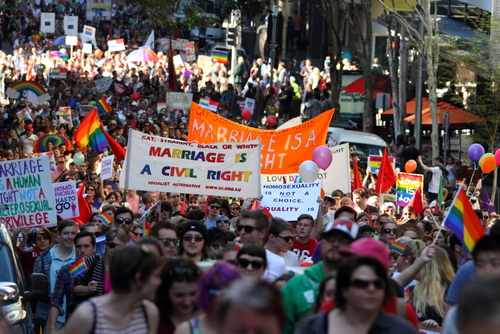 As senators returned to work following the midterm elections, the leading Democrat in the Senate is pressing forward with legislation to safeguard same-sex marriage.

Monday evening, Senate Majority Leader Chuck Schumer (D-New York) moved for cloture on the Respect for Marriage Act, paving the way for an initial vote later this week. The Senate requires a minimum of sixty votes, evenly divided between Democrats and Republicans. According to him, passing this measure will enact “much-needed protections” into federal law.

Late in September, lawmakers went on recess, allowing them time to campaign in their home districts for the upcoming midterm elections. The Senate will stay under Democratic control; the dominant party in the House was still undecided as of Monday night, although Republicans were gaining ground. According to a calculation by the Associated Press, Republicans have gained 217 House seats compared to 205 for Democrats, and a party requires 218 seats to hold the chamber’s majority.

Before the start of the new Congress, Democrats in both houses will have a few weeks of work in Washington, D.C., during the so-called lame-duck period. A second aim is to adopt legislation extending government financing over the Dec. 16 deadline. If no legislation is approved, federal agencies will shut down.

The same-sex marriage bill’s proponents believe it has sufficient support to pass the Senate after certain modifications to the text addressed religious liberty concerns. In July, the House of Representatives enacted a similar bill, with several Republicans joining Democrats in support.

The organization stated that the most recent version of their proposal makes it plain that nonprofit religious entities would not be obliged to provide venues for marriage and that opposition to same-sex marriage will not jeopardize a religious organization’s nonprofit status. It also makes plain that the law does not recognize polygamous marriages.

If enacted into law, the Respect for Marriage Act would formalize the ability for same-sex and multiracial couples to marry and oblige states to recognize the marriages. This year’s Supreme Court decision abolishing the federal right to abortion sparked the drive to codify same-sex marriage, which caused some politicians to push the codification of same-sex marriage, claiming that it may be in jeopardy of being declared illegal.

Mr. Portman told reporters on Monday evening that it is crucial to offer individuals stability in their marriages and assurance that they would not lose their rights when they migrate from state to state.

Sen. Joe Manchin (D-West Virginia) will likely redouble his efforts to pass a bill that expedites federal environmental evaluations of large energy projects. This idea was originally attached to government financing legislation in September. Still, Mr. Manchin removed it when it became apparent that he was having trouble securing enough votes from his colleagues.

White House officials and senators from both parties have agreed that the process for obtaining permits has to be modified, although they disagree on the specifics. Mr. Manchin said he expected to talk with colleague West Virginia Senator Shelley Moore Capito, a Republican who proposed a competing permission plan, to advance a permitting proposal. According to a person involved with the discussions, Republicans may be more inclined to accept a bipartisan agreement now that the Democrats are in charge.

A vote to revoke the government’s emergency declaration over the Covid-19 outbreak might be one of the first items before the Senate. The vote is anticipated as early as Tuesday afternoon.

The emergency status, originally proclaimed in March 2020 by then-President Donald Trump, enables the government to exercise unique executive authority under the National Emergencies Act. Legislators have the authority to request periodic votes to end this status.

Soon after President Biden’s September statement on CBS’s “60 Minutes” that “the pandemic is over,” Kansas Republican Sen. Roger Marshall urged Congress to vote on the national declaration’s status. He has criticized the statute’s expansive presidential powers and Mr. Biden’s use of the act to suspend student-loan payments.

Additionally, the House would have to vote to terminate the status.

Separately, the White House intends to propose $10 billion for research and treatment of Covid-19 and other disorders, according to sources with knowledge of the situation. Previous requests for more expenditure on Covid this year have been denied.

Some Democrats are pressing congressional leadership to alter the debt-ceiling procedure or increase the borrowing limit to prevent Republicans from using the problem to coerce policy changes or spending reductions.

House Minority Leader Kevin McCarthy (R-California) has stated that if Republicans take control of the House, they will demand expenditure cutbacks by increasing the debt ceiling.

By law, Congress must establish a limit on the government’s borrowing. Raising the debt ceiling does not permit additional expenditure; rather, it enables the government to satisfy current commitments, such as paying out Social Security checks and making debt payments.

In addition, lawmakers could enact the Electoral Count Act, which has enough support to pass with the required 60 votes. The legislation would amend a law from 1887 that governs how Congress handles presidential-election disputes. The legislation has been pitched as a way to prevent a repeat of what occurred after the 2020 presidential election when President Trump asked Vice President Pence to reject some states’ votes in the Electoral College.