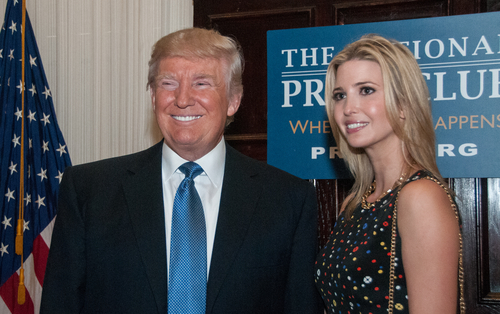 While the corporate media continues to ignore stories that could cast President Joe Biden’s son Hunter Biden in a negative light, former President Donald Trump was forced to set the record straight once again about his family’s experience with “SleazeBags” and the requests he made of them.

Other presidential hopefuls will likely announce their challenge to Trump for the 2024 Republican presidential nomination in the coming weeks and months. Since his campaign kicked off in November, speculation and criticism have surrounded the whereabouts of Ivanka Trump and Jared Kushner, his daughter and son-in-law. The president appeared to anticipate the inevitable repetition of these unfounded claims by issuing a scathing rebuke of the “Fake & Corrupt News.”

Truth Social Monday saw Trump take to social media to dispel rumors that he had asked Jared or Ivanka to join his 2024 presidential campaign. He went on to say that dealing with the Fake & Corrupt News and various sleazy politicians made politics too unpleasant.

He went on to say that Ivanka and Jared shouldn’t have to go through any more of this “ride” because it’s unlike anything they’ve ever experienced.

A New York Post article published the day before his campaign announcement suggested that “Javanka” wanted no part of Trump 2024, and the Truth seemed to many to be a response to that article.

The report claims that Trump tried to persuade Jared and Ivanka to celebrate with him on stage during his announcement the weekend of his youngest daughter Tiffany’s wedding. According to the report back then, “the man known as ‘The Art of the Deal’ has not closed this one so far.”

The Post cited an “insider” who claimed that Trump had hoped to persuade Ivanka to return to the campaign trail for him because she had been the second most requested speaker after the president. But so far, she has not given in to his pleading, nor has Jared. They feel betrayed by Washington and do not wish to return and subject their children to another divisive election.

At the time of her father’s campaign launch, Ivanka released her own statement that did not contradict either the Post’s or the president’s version of events but did confirm that she would, in fact, be putting her family before politics, that she loves her father very much, and that she is, at this time in her life, choosing to prioritize her young children and the private life they are creating as a family.

She continued by saying she has no interest in politics and that while she will always support her father, she plans to do so from now on in ways that have nothing to do with politics.

Ivanka concluded her statement by expressing her gratitude for the opportunity to serve the American people and her pride in the many achievements of her father’s administration.