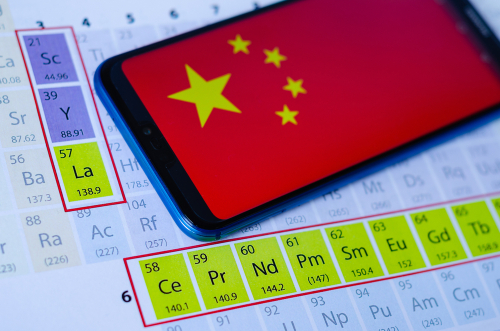 As tensions rise with China and Russia, the U.S. defense stockpile for scarce metals and lithium-ion battery materials is getting one billion from Congress.

The National Defense Stockpile stores components for producing various weapons, tools, and machines. Defense researchers claim that the stockpile has been practically depleted in recent decades, putting the supply chain for the United States armed forces at risk.

Rather than receiving new funding from Congress, the stockpile typically finances its acquisitions by selling unused commodities. As of September 30, 2021, the stockpile account has $262 million, according to a study issued in February, which defense officials claimed was not enough to acquire all of the necessary items.

Managers of stockpiles have recently been on the lookout for rare-earth materials, including neodymium, cerium, and extremely strong magnetic material. One application is in rechargeable batteries for military vehicles and equipment, where silvery lanthanum metal plays a crucial role.

Senator Jack Reed (D., R.I.), the ranking Democrat on the committee that writes the yearly military policy bill, has remarked that rare earths are crucial to America’s national defense and economic security. He went on to say that access to key resources and fortifying our stockpiles is a pressing concern.

The White House study from 2021 suggested investing $1 billion to strengthen supply networks and reinvigorate manufacturing in the United States; the sum was approved. The assessment concluded that the United States’ strategic stocks had been ignored for far too long.

Unlike other parts of the NDAA, including Republicans’ successful attempt to repeal the military’s Covid-19 vaccination mandate, the decision to refill the stockpile had widespread bipartisan support. According to American Enterprise Institute fellow John Ferrari, the money is being spent as a form of insurance. The goal is to lessen military vulnerability at a time when China, the world’s leading supplier of mined resources for cutting-edge technologies,  is putting the United States’ relationship to the test. For him, the money invested in national security to avert conflict is well spent, as he put it.

In 1939, as World War II was underway, Congress approved legislation mandating the establishment of the National Defense Stockpile. It authorized stockpile managers to purchase bulk commodities that aren’t commonly used in the United States but would be required by military manufacturers in the event of a national emergency. The goal is to reduce U.S. reliance on foreign suppliers.

According to the most up-to-date public report on the stockpile’s contents, it had items valued at $1.28 billion as of September 30, 2021. At the time, nearly fifty different materials were present, including 203 kilos of dysprosium, a rare-earth element used in magnets, and 666,135 pounds of cobalt.

About eighty employees are employed by the Defense Department bureau responsible for stockpile management, many stationed at various storage facilities across the United States. The United States has a stockpile of vaccinations in case of biological or chemical agent assaults. President Biden has used oil from special reserves to reduce gas costs during the past year.

For at least the past decade, defense industries have had no use for the materials in the stockpile. Only when Congress has declared war, with the president’s signed order, or with the consent of defense officials is it permissible to release classified information.

The stockpile’s function isn’t as hypothetical as we would want, according to Maiya Clark, a senior research associate at the Center for National Defense at the Heritage Foundation. According to her, policymakers were reminded of the precarious nature of international trade when the Covid-19 outbreak interrupted global supply chains. Increasing the stockpile’s funding is “long overdue,” she said.

Stockpile managers at the Department of Defense work with the Energy Department, the Commerce Department’s trade and security divisions, and the U.S. Geological Survey’s National Minerals Information Center.

They search for materials that can be sourced from a small number of locations worldwide, that may become problematic in the event of a war, and that can’t be produced rapidly by American businesses.