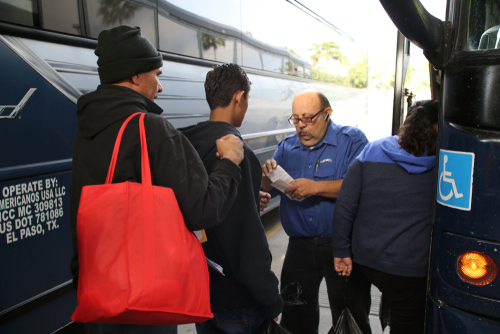 It seems as if Republican governors are competing to bring migrants from the US border by bus to New York, Washington, DC, Chicago, and now, Martha’s Vineyard. Perhaps we will see a boatload to the famous Statue of Liberty.

On Thursday, Texas Gov. Greg Abbott may have outdone Desantis by placing two busloads of migrants outside of Vice President Kamala Harris’ Home at the US Naval Observatory. Abbott began busing migrants to Washington, DC, New York, and Chicago. Immigration hawks have slammed her for claiming on NBC’s “Meet the Press” on Sunday that she is convinced the border is “safe.”

Some stated that the political argument was made at the cost of vulnerable refugees. However, others view this as an opportunity for the migrants. Many refugees expressed gratitude for the trip, which gets them closer to family members at no cost to themselves. Additionally, some of these states are able to process immigrant cases faster than Arizona, Texas, and Florida. The wait time for immigration cases in the Republican states is considerably longer due to the number of cases sitting on their court docket. Those aboard the buses and aircraft are technically asylum applicants who have been vetted by federal immigration officials and are awaiting court dates.

While most migrants crossed into Mexico, they are escaping weak economies and hazardous circumstances in Central America and South America. After crossing the border and claiming asylum, individuals are freed in the United States to await asylum hearings.

The Migrants are not forced onto the plane or the bus. Anger at the antics is fueled partly by the incorrect notion that people are being coerced into buses, and that is not the case. Some migrants who arrived in the United States without a place to stay were grateful for the free journey.

According to the criteria provided on the US Citizenship and Immigration Services website, they are unlikely to be able to work legally for at least 180 days. Obtaining a work permit takes a lengthy time.

According to New York City officials, obtaining a work permit can take up to a year. According to Syracuse University research, the average time to complete an immigration case is 1,110 days. During this time, migrants and asylum seekers began establishing themselves in the United States.

According to Syracuse, less than half of asylum claims have been approved in recent years. The denial rate was over 70% during the Trump administration, whereas the grant rate increased to about 40% during the first year of the Biden administration.

So far, in the fiscal year that ends September 30, US Customs and Border Protection has documented roughly 2 million border interactions.

Repeat crossers are among those encountered. Other people have been turned away because of the Trump administration’s Covid-19 policy, which the Biden administration has failed to repeal so far. A small number are seeking refuge.

Officials in New York City, Illinois, and Washington, DC, have declared emergencies in response to the buses. They have complained that they have no clue when or where to anticipate them and demand a warning from Texas, Arizona, and now Florida. Texas has paid more than $12 million to transport around 9,000 migrants north. Thousands of migrants have been relocated by buses and now flights, but this is only a fraction of the approximately 700,000 pending asylum claims that are slowly working their way through the legal system.